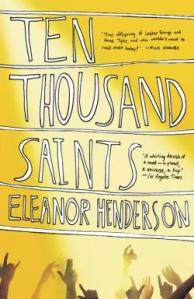 I found this to be a very moving novel of adolescent angst, that really captured the confusion of growing up in an era that is both hedonistic and fraught with the fear of the consequences of having fun. New Year’s Eve 1987, and two teenage boys are hanging out and getting high, looking with enthusiasm to all the future holds, navigating the brutal world of maleness and longing for their first sexual encounter. It will be a night of transition, of coming of age, of initiation, and only one of them will survive to see New Year’s Day.

The aftermath of that fateful night will play out amongst a tangled cast of characters, all of whom deal with tragedy in a different way, and are looking for guidance from grown-ups that is sadly absent. Jude throws himself into the oblivion of drugs; Eliza sleepwalks her way through events she is not yet ready for; and Johnny tries desperately to do the right thing, even if it means sacrificing what he really wants. The backdrop is eighties America, a land of punk bands, drugs, tattoos, HIV and rage against the establishment. It is vividly depicted and the author creates a real sense of time and place, given an added edge through her characters’ clumsy attempts to carve out their own destiny in a world they cannot control. The depiction of the straight edge scene, in the nobleness of Johnny’s efforts and the transformation of Jude, is fascinating, matched as it is by the spontaneous violence of the punk scene to which they also belong; and poor Eliza, caught in the middle, is an echo of the hippy movement of the sixties and how the promise that it held for women got distorted in a new decade. Although set in America it really resonated with me, bringing back memories of an eighties childhood, and I really enjoyed the characters’ journey, as they start to face their adult responsibilities. Rating: ***

This title was provided by the publisher for review