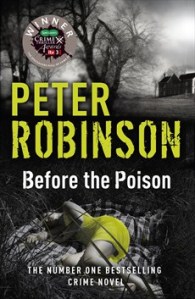 This was a really enjoyable read which livened up my lunch breaks, by the author of the DCI Banks crime novels. Before the Poison is a standalone novel so a good place to start if you’ve never tried Robinson before. It tells the tale of an infamous murder case in the 1950s, in which a woman was hanged for her husband’s murder. In the present day, composer Chris moves back to England after the death of his wife, buying the isolated farmhouse in which the murder occurred. Before long he’s obsessed with the story of the scarlet woman Grace Fox, and determined to prove her innocent of the crime. The dead woman is enigmatic and inscrutable, but Chris feels an emotional connection to her, so much so that he can see her in the shadows of the house…. Ghostly undertones aside, as her story is slowly unravelled he will uncover much more than human tragedy, but endurance beyond belief, the shocking capacity for evil that lurks behind the facade of respectability, and corruption that reaches into the present day. The truth behind the events of that fateful night in 1953 is revealed with aplomb, and Robinson creates a convincing and highly readable mystery with characters that engage you. I thoroughly enjoyed this spooky murder mystery and will definitely read more by this author. Rating: ***

1 thought on “Before the Poison by Peter Robinson”