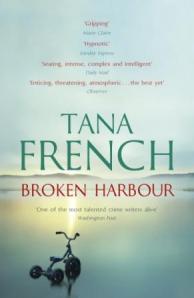 “Let’s get one thing straight: I was the perfect man for this case.”

Tana French is fast becoming my favourite crime writer. Her intricately constructed tales are focused on character, and her meticulous exploration of the psychology of human beings is riveting; her novels are not just about the crime of murder but also about the trauma of living.

In Broken Harbour, detective Michael Kennedy has a record number of “solves”. So he’s confident, when he attends the crime scene with rookie Richie Curran, that he’ll soon close the disturbing case of a family butchered in their own home. Statistics say the father is the most likely perpetrator, but the private life of the Spain family is a riddle that Kennedy determines to crack. But nothing is as it seems, and Kennedy’s private life is about to intrude into the investigation in a big way.

I just got lost in this story. Kennedy is perhaps not as strong a character as Rob and Cassie, her previous detectives, but I was soon embroiled in his flawed viewpoint and moral dilemmas. The rest of the cast, with their complex and intriguing motivations, really live and breathe. Her evocation of the dying housing estate is hauntingly moving and the broken harbour of the title takes on a multiplicity of meanings as the story slowly unravels. And I didn’t see the ending coming.

I think what stays with you in all French’s novels is the sense that moral judgement is meaningless. All her protagonists are faced with huge choices between right and wrong, and whatever they do there isn’t actually a right answer; we do what we do, and we have to bear the consequences. Her stories are haunting, disturbing because they have such truth in them, and beautifully wrought. Rating: *****