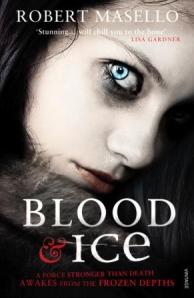 Reproduced with kind permission of Vintage

I picked this up because a) the cover looks darn good, and b) the blurb promised a twist on the glut of vampire romance stories that have been so prevalent recently. I wasn’t disappointed! The dual narrative follows photographer and journalist Michael, who flees from the tragedy of his girlfriend’s death to the frozen wastes of the Antarctic, and the mid-19th century tragedy of Lieutenant Sinclair Copley, caught up in the Crimean war, and his lover Eleanor, who joins Florence Nightingale’s nurses in order to follow him to the battlefront. When their frozen bodies are found deep in the ice over a century later, chained together, Michael starts to fall in love with the frozen woman – but the thawing of hearts will have a price….

The author is a screenwriter and this shows in the cinematic pacing – I can well imagine this novel turning into a film. Its plotline is unusual and interesting, and the setting of the Antarctic station is very well-realised. It is a little slow to get going however, and I personally would have restructured the beginning to mirror Kristin’s accident and the “drowning” of Sinclair and Eleanor, starting with Michael’s desperate fight to save Kristin, which would have allowed us more into his head from the beginning. But that aside, it’s an entertaining read with some genuinely tense and scary moments – some of the supporting characters have some great memorable moments as they meet their fates –  and it doesn’t slide into vampiric cliché; it’s a love story that feels authentic within the confines of the supernatural genre. If you like vampire fiction but are sick of the Twilight derivatives, then give Blood and Ice a try. Rating: ***

1 thought on “Blood And Ice by Robert Masello”