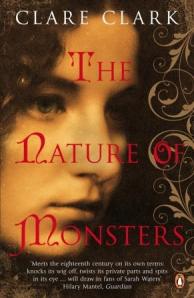 Reproduced with kind permission of Penguin

This is a real pot-boiler set in the 18th century, drawing on the history of emergent medical science and the rise of myths and superstitions that accompanied it. Eliza has been steeped in women’s herbal lore, which traditionally has had power in her village; selfish and devious, with the help of her mother she plots to marry the son of the local landlord, but she is out-manoeuvred and finds herself disgraced, pregnant and effectively sold into bondage to a city apothecary. The Black household is cold and cruel, and its master obsessed with proving that events during pregnancy affect the physiognomy of the baby; Eliza is the perfect subject for his experiments. Believing that Black will rid her of the baby, Eliza submits, thinking that she can outwit her master and his insane plans – but the selfish girl reckoned without her own growing affection for her fellow servant girl Mary, and the unpleasant attentions of Edgar, the apothecary’s apprentice….

The language in this book is sumptuous enough to wallow in, despite the gruesomeness of the setting and the events, and paints a visceral picture – “the floor sweated a fatty skin that tugged at the soles of my feet”, “The house was… like a skeleton…the stairs like the knobs of a spine down through its hollow centre”. It draws you in, but it is Eliza’s scathing narrative voice, slowly softening to love, that keeps you hooked. Her relationship with Mary, who has learning difficulties, is very touching and a note of real sanity in a household that is delirious with laudanum and quack science. It’s a vivid novel, shocking in places, and I thoroughly enjoyed it. Rating:****